Description of measurements for small-sized bassoons

The following diagrams show primary external and internal measurements collected from small-sized bassoons. These can be found in each instrument’s datasets, in the file “Basic and complete measurements” located at the Zenodo data repository: https://zenodo.org/search?page=1&size=20&q=fagottino

Measurements such as bore diameters and distances taken externally are represented in blue, and those taken internally, in red. Bocal dimensions taken include length, diameters at regular intervals north/south and east/west, and diameters at both ends.

Note: Total internal bore lengths are calculated using: internal bore lengths of the wing joint (including bocal well), butt joint (big and small bores), long joint and bell, minus socket lengths of the big and small bores in the butt joint, as well as the bell socket. A calculated allowance of septum space for fagottino (25 mm) and tenoroon (35 mm) is added. 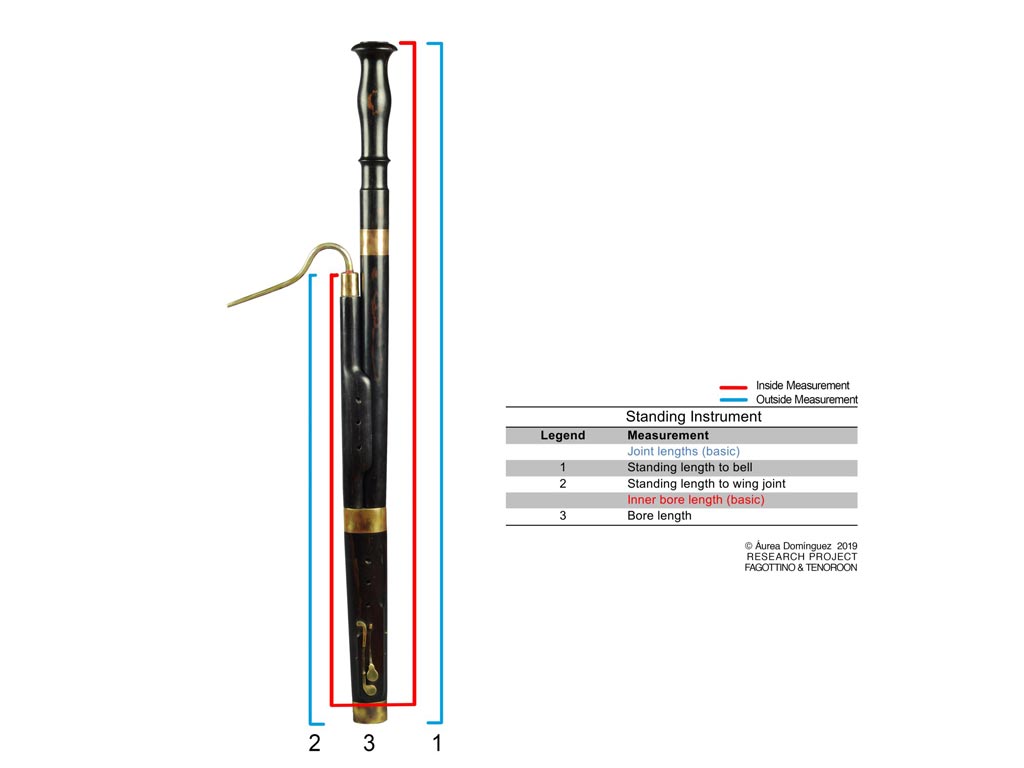 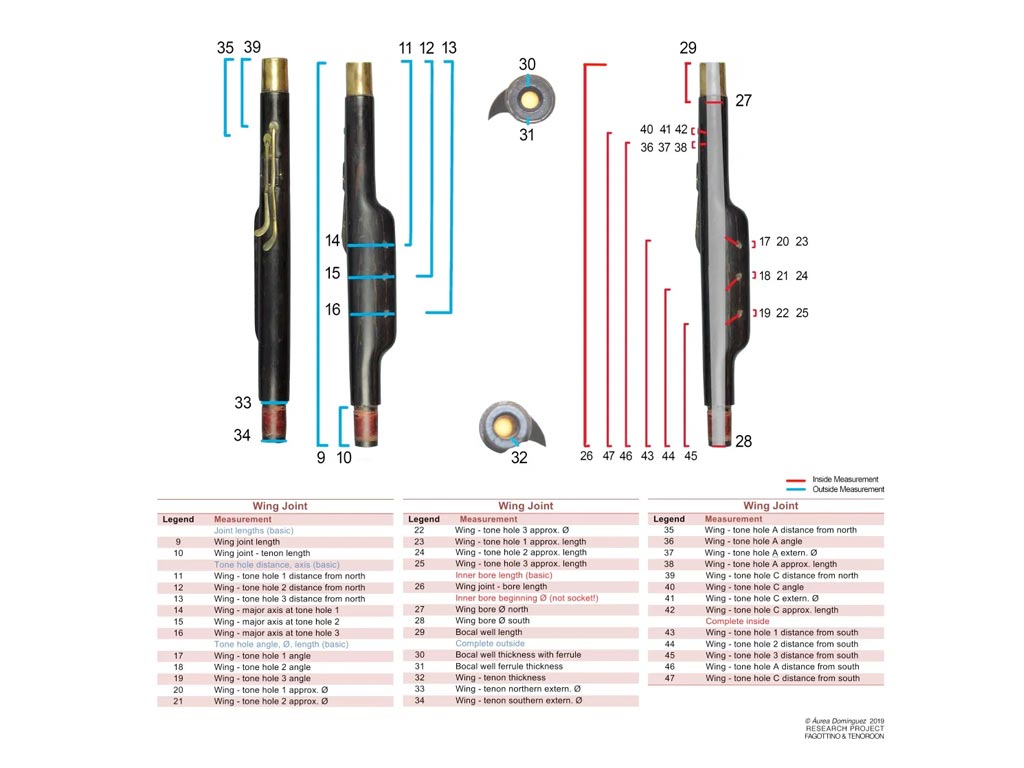 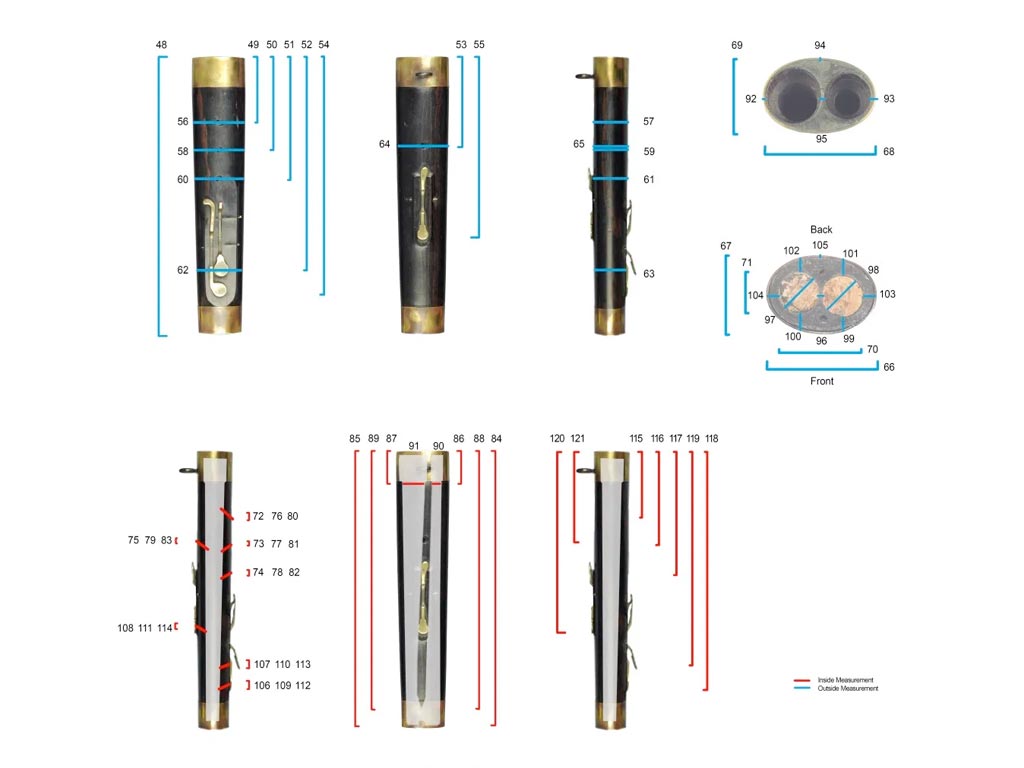 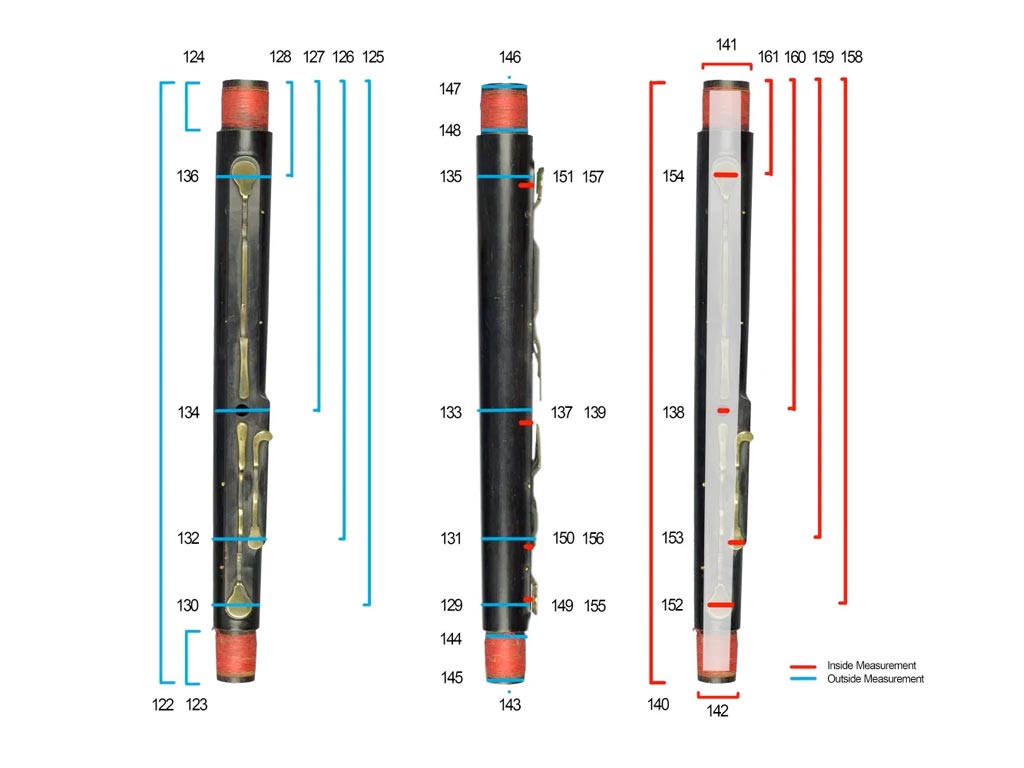 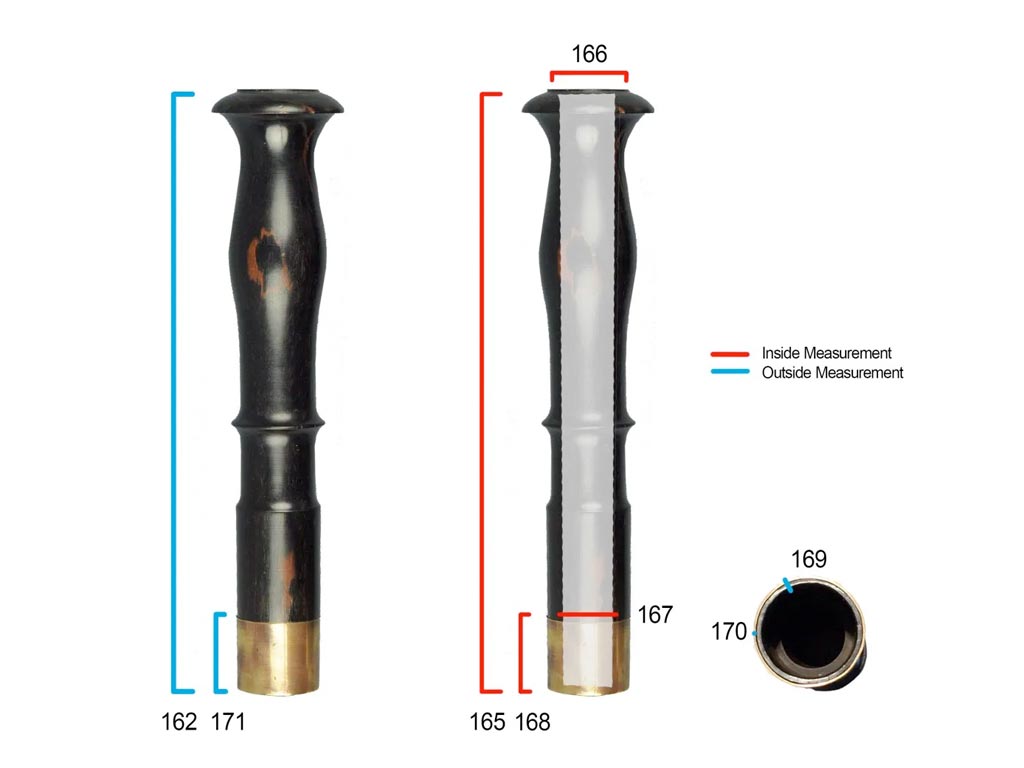 Each measured value consists of two components: L, the depth (or distance) measured between the reference point R (end of instrument where measuring tool is inserted); and D, the diameter (Ø) at that point. L and D are perpendicular.

L minimum (Depth min.) and L maximum (Depth max.) are recorded for each fixed-diameter interval. (Woodwind bores tend to shrink over the years, resulting in cross sections and having some degree of ovality.) It is not required to find the maximum and minimum diameter at each point, but it is necessary to turn the instrument bore with extreme care while inserting the tool.

The diameter progression inside the bore reflects these diameters steps as shown in Table 1.

If it is not possible to uncork butt joint, the small bore cannot be measured with this tool; the series of rods cannot pass through the beginning of the bore, as the bore starts with its smallest diameter and expanding down to the septum and cork space.

How can one measure the small bore in the butt joint?

In case uncorking is not possible, a tool inspired by David Rachor has been made in order to collect measurements of the small bore of the butt joint (tilting caliper stick, Figure 3). This tool is very similar to Everts’, the difference being that a tilted caliper can enter the bore, attached to the ruled stick with a flexible wire. When the bottom of the bore in the butt joint is reached, the wire is pulled so that the caliper leaves its tilted position and takes a perpendicular position on the ruler stick. Depths of diameter can thus be recorded. Using this tool, values will display in a decreasing series of diameters and a corresponding decreasing series of depths.

If the butt joint can be uncorked, then Everts’ measuring tool can be used to measure the small bore and data collected by inserting the tool through the cork space (south). Values will display the usual series of increasing diameters corresponding to a decreasing series of depths.

The bell is measured with Everts’ tool, starting from the southern part. Usually the bell’s smallest diameter is at the end of the northern part, starting south with its largest.

Often, bells having an almost or very cylindrical bore were measured. In this case, two series of value sets are offered: one measured from south to north and one measured from north to south, often with an irregular series of depths with big steps. Shrinking and/or ovality are more evident in these cases.

Some bells have an internal bell chamber right before its end (north). In order to measure this, the tilting caliper stick is employed. It is inserted with the tilted caliper from north into the bell; value collection goes from south to north, that is, from the beginning of bell chamber to its end; values will display a decreasing series of depths and an irregular series of diameters (first increasing then decreasing).

A special tool was designed for this purpose:

For this website, we distinguish between essential cookies (which are used to ensure error-free use of the site, so that all functionalities are available), as well as statistics and marketing cookies (which allow us to understand and optimise the use of our offerings and promotional opportunities).
You can find more information at Data Privacy.
scroll back to the top